What do you do when you have been particularly lazy on the Labour Holiday weekend, woken up at a leisurely pace, dawdled around the apartment with a mug of cold coffee and a book? But then you want to step out on a beautiful spring day too for a spot of pub lunch and browse around idly for knick knacks.

Our bank holiday weekend began in the above-mentioned way because we are just notoriously lazy – my husband and I. We live in the vicinity of the rolling hills in England that are dotted charmingly with sheep, cows, thatched medieval villages, churches and mansions. When the sun shines, the cottages in these villages glow honey gold and look so out of a picture postcard setting that they are generally deemed to be ‘chocolate boxes’. They were mostly constructed during the Middle Ages when wool trade brought wealth to the area, and alongside the cottages, merchants constructed ‘wool churches’ using the locally-quarried limestone.

The villages of the Cotswolds that run the length of five counties – Gloucestershire, Oxfordshire, Warwickshire, Wiltshire and Worcestershire – make up the best of rural England and fall within the Area of Outstanding Natural Beauty (AONB) in the country.

We have spent most of our stay in the good old Blighty exploring them. There is no fighting it. The Cotswolds steal upon the senses. The list is long and varied in character and you can never associate ennui with the region, even if you end up visiting the same villages again and again.

When we go on these frequent trips, I imagine bumping into Laura Timmins tripping down a field in her pretty straw hat and postwoman’s sober ensemble or the sly Twister Turrill, hobbling down a country lane, muttering away to himself. They are characters from Lark Rise to Candleford, a trilogy of 19th century novels that were written by English poet and novelist Flora Thompson, inspired by her own life in Oxfordshire. You must have read them, right? If you are not much of a reader, you have to catch up with the eponymous BBC series. I promise you, you are in for a treat. When parts of it were enacted in plays in London in the late 70s, a theatre critic had observed: “It will send most spectators out wiser and happier human beings…one of those rare theatrical occasions with a genuine healing quality.”

It is crucial to have a car to drive around the Cotswolds. Unless you plan walking holidays around the place – there is actually a 102-mile long Cotswold Way walking trail which starts at an escarpment from Bath and continues up north to Chipping Campden. Maybe someday I can convince the husband to undertake a walk along this trail with me, though that might entail innovative bribes like carrying a massive bag of M&M’s to lure him from Bath to Chipping Campden. A plan to be pondered upon (If you are reading this, o husband of mine, and feeling suitable alarmed as I imagine you are, ‘tis a good reason to wean yourself off M&M’s).

The town of Burford in the Cotswolds was our chosen spot for lunching on a sunny Saturday. Though, as is usual, the weather gods were in a tizzy. The day alternated between inky grey clouds scudding across a bright blue sky, scattered drizzles and downpours. It would turn sunny, become slightly warmer in intervals and all over again the cycle would kick in – the clouds would come haunting the sky and dastardly cold winds lash out at us. There is never boredom to be associated with a day out in the English climes. 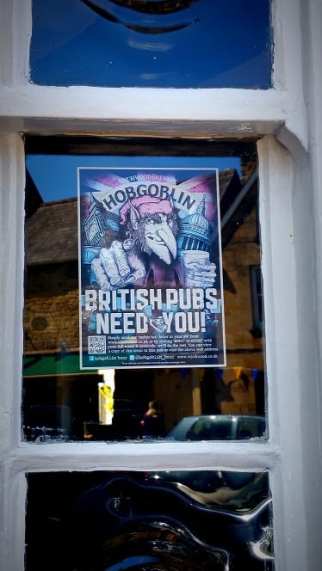 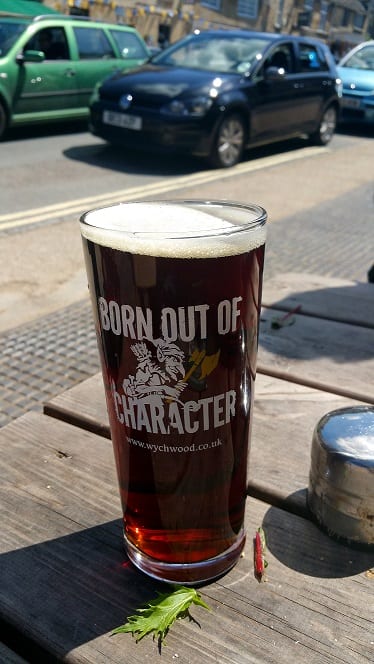 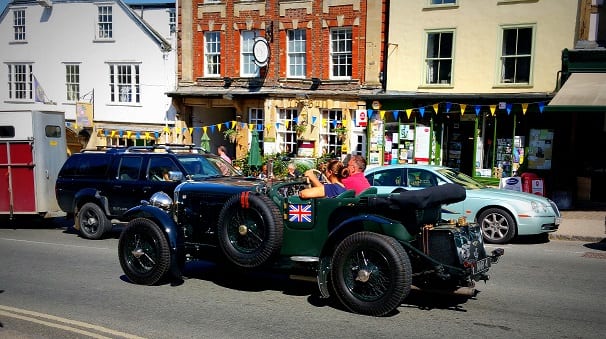 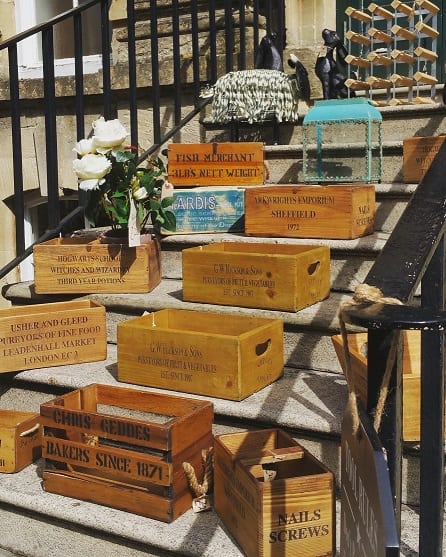 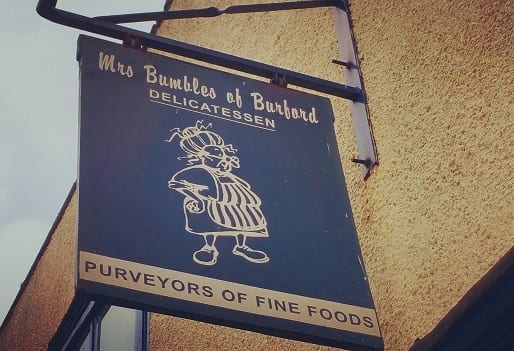 The road from the university town of Oxford that enters Burford is a particularly leafy avenue that takes a sudden dip and opens up a vista of yellow rapeseed fields in the horizon. You find yourself driving through a bustling high street flanked by old Tudor and Georgian properties, pubs and antique shops. It is one of the most charming entrances in the Cotswolds. It is difficult to forget Burford in a hurry.

The once fortified Anglo-Saxon ford – the town gets its name from the Old English words ‘burh’ that means fortified town and ‘ford’ — was a wool town of considerable wealth on the River Windrush. Its geographical position, as a town at the crossroads, only heightened its popularity. Local industries such as tanning, weaving and sheep farming thrived in Burford. At one point of time, it had the best saddle-makers in Europe.

There are a host of lovely eateries in the town. One of our particular haunts is The Cotswolds Arms, an ivy-covered rustic 18th century pub that serves good ales and home-cooked pub grub. My husband had his favourite pub meal of gammon and chips and an ale, I tucked into a light but tasty beetroot salad served up with chunks of Stilton cheese, caramelised walnuts and roasted chicken.

After a prolonged lunch, we set off to do our cherished browsing around the boutiques and shops of Burford which are small and mostly family-run affairs.

My picks of the lot are The Oxford Brush Co. where there is a brush for every need in the household. Think on the lines of hair brushes, shaving brushes, computer brushes, shoe brushes, bottle brushes. The bristles on these brushes are so incredibly soft that you could bury your face in them and sigh away. They are apparently crafted out of hairs of horses, badgers and Chinese long-haired goats. Only the prices make sure you do not go bonkers about ‘em brushes.

I almost always fall for foxed books at a former coaching inn which is now Antiques @ The George. This time I picked up a translation of Bede’s Anglo Saxon Chronicles and an old tome of Palgrave’s Golden Treasury for nostalgia’s sake. They cost me a mere 7 quids. If you are into rummaging for vintage finds, this antique centre has some treasures and pre-war memorabilia that makes the heart skip a beat. Our treasured buy from Antiques @ The George is a 19th century iron – it is deceptively small but packs a punch on the weighing scales, made as it is of cast iron . Skip across the road and there’s The Burford Emporium with its collection of wooden carts, old maps and books.

Lastly, do not miss out on the cuteness of Three French Hens, with its treasure chest of collectibles and gifts. I have to put on blinders and exert all my self-control when it comes to not raiding this shop.

There is a Burford walking tour that orients visitors with the area but the main two buildings of note are the church and the 16th century Tolsey building on the high street. The church, in 1649, served as a prison during the Civil War 340 prisoners were held inside it. The Burford-ians celebrate the incident by organising an annual Levellers Day in town during the month of May. They commemorate the Burford Levellers who protested against Oliver Cromwell for not paying his troops post the Civil War. Three of their leaders were executed by Cromwell’s men in the church yard. Their graffiti and carvings have been left intact in the church. While the Tolsey market building with its white Tudor façade has been transformed from a medieval merchants’ meeting grounds into a museum on the trades that flourished in Burford – clarinet-making, brewing beer, bell-founding and rope-making. A big incentive is a famous doll’s house that reflects the Georgian era style in which Jane Austen lived.

Leaving ‘the gateway to the Cotswolds’ behind in Oxfordshire, we puttered into the ‘Little Venice of the Cotswolds’ in Gloucestershire. Bourton-on-the-Water, a beloved village of ours in the Cotswolds, also sits pretty on the Windrush. A series of low-arched stone bridges span the shallow river that runs along the high street. On any sunny day in summer and even winter, children and dogs are the popular occupants of the river. The ducks are quite used to them by now. The ice cold waters of the river reach my ankles but the sharp-edges of the pebbles in the river bed is enough to make me hop out as quickly as I hop in. 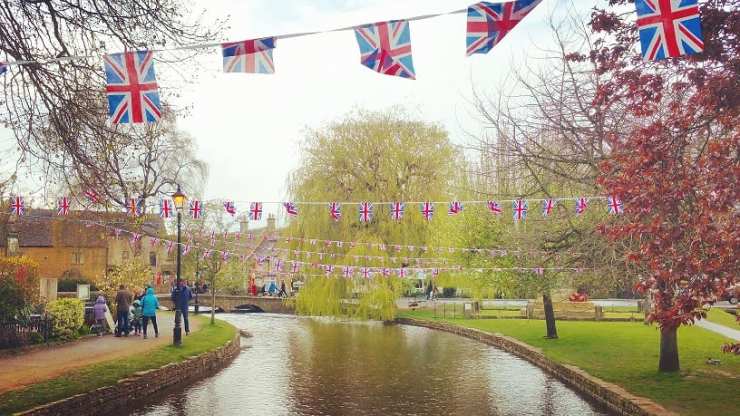 You can do a lot of touristy things in Bourton. Visit its small perfumery, gawk at the exotic birds in the Birdland and spend time in the model railway museum and motoring museum, but for us, Bourton has become a ritual, of walking past the willow trees that droop elegantly over the river, the riverfront stone cottages that make me yearn to live in one, tucking into full-fat ice creams, browsing the cutesy shops around and relaxing in the lovely garden of The Kingsbridge Inn, chugging on frothy beer.

Yet, on this bank holiday weekend, the clouds rolled in again and the evening started getting unaccountably cold – a bit of shopping done, the husband amused me by shivering away and gorging on a massive dollop of mint-chocolate chip ice cream, while I had the most bitter cup of cappuccino I have had in some time. It did the trick however and we drove back home in pelting rain followed by a full rainbow appearing in the lavender blue sky of the evening.

3 thoughts on “The Wolds on the Windrush”