Derbyshire is quirky. Church spires are crooked. Lanes are marked Unthank and pubs are often dedicated to ‘tickled trout’. Auto rickshaws sit atop porches. Old men sell copper kettles in antique shops and tell tales of men filling kettles with water to hurl them at wives in days gone by. Pet rabbits feast on iced cakes. These are just a few signs to go by.

So, it has been an extremely dull few weeks in England. Insipid and dreary are a couple of adjectives that come to mind but there could be a dozen more. But weather be darned, to get out on the road is the story of our lives, and on a ho-hum day, we set out for the Peak District National Park, England’s first national park designated so in 1951.

Just like the Cotswolds, the Peak District spans a substantial area of English counties. From northern Derbyshire to parts of Cheshire, Greater Manchester, Staffordshire and Yorkshire. They lie in the southernmost Pennines.

Small settlements of stone villages pop out among vast stretches of wild moors, caves lurk in rocky outcrops, escarpments and gorges mark the region, and once in a while mansions loom on the horizon. It is a charming area for cyclists and trekkers.

The park is divided into the Dark Peak and the White Peak portions. We could see both in one day. The Dark Peak justifies its name with stretches of black peat moors, dark granite and gritstone plateau. The landscape is complemented by stories that often add to the atmosphere of such remote places. A few military aircrafts crashed in the area during bad weather and hikers claim to have seen ghost planes – usually wartime propeller-driven planes. Meanwhile, the White Peak is about limestone dales and a lush green landscape.

The drive into Derbyshire perked up when the crooked spire of the St Mary and All Saints church of Chesterfield showed up. The medieval church (from the 13th century) is famous for just that – its spire that leans and twists visibly.

The folklore behind it concerns a virgin who was getting married in the above-mentioned and the church was so surprised that its spire turned for a look at the bride. And that if another virgin gets married in the church, the spire shall right itself again.

It speaks volumes, I suppose, of the imagination that can invent such stories.

But it is said that the 32 tons of lead tiles on the spire led to expansion and contraction of the lead and thus the spire is facing the brunt of it.

Now, however dull the day, the lush green of the British countryside never fails to make the heart sigh with pleasure. We passed through the bunting-clad stone villages of Hope, Hathersage and Barlow and arrived at Castleton that is wedged between the Dark and the White Peaks.

Peakshole Water, a tributary of the River Noe, rushes through the middle of the village of Castleton. It is a beautiful little place capped by the 11th century Peveril Castle, a Norman castle that belonged to William the Conqueror’s bastard son, William de Peverel.

We lunched at a 17th century coaching inn called the Ye Old Cheshire Cheese Inn. It was a traditional dark pub with low beams and timbered interiors. A list of the former landlords of the inn were scrawled on the beams of the pub. It was so atmospheric, that dark old pub, as we sat and tucked into crunchy beer-battered onion rings, fat chips, gammon and a local brew called Moonshine. Not the hooch that is commonly known but the Moonshine I am talking about is a kind of pale, straw-coloured craft beer that is brewed at the Abbeydale Brewery in Castleton.

We walked off the torpor induced by the Moonshine with walks around Castleton. At a small antique shop which appeared to be set in another day and age and tightly stacked with decrepit collectibles, we fell prey to the charms of copper kettles. We bought one of those dented copper kettles that show their age and what came free with the service was the humour of the old man who cackled as he wrapped it up for us. “Now don’t you go boiling water for tea in this kettle,” he waggled his finger in our noses. “With all the austerity talk and recession, I have been hearing of people using these kettles to boil water for tea,” he said. After several assurances that we would restrain ourselves, he let us go.

Past a huddle of houses, clustered around the gushing waters of the Peakshole Water, we reached the subterranean chambers of the Peak Cavern. There are three more caverns in the village – Treak Cliff Cavern, Speedwell Cavern and Blue John Cavern. Two of them, Treak Cliff and Blue John caverns, are encrusted with Blue John, a semi-precious mineral, and the mining of it means that the local high street is flush with Blue John studded jewellery.

My mister at the Treak Cliff Cavern 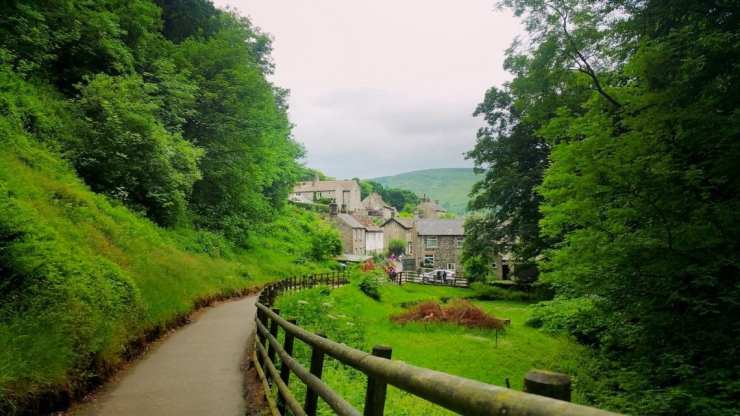 Yet it was a grim day for exploring dark chambers, so we spent some time at a farm with a few fat sheep and their lambs, cuddly rabbits whom someone had had the bright idea of feeding buttercream cake and a trio of friendly goats.

Next on our schedule was Winnats Pass, a dramatic, winding stretch through a cleft that is flanked by towering pinnacles of limestone, but one that ignites the imagination to the possibility of various traditions of storytelling.

In the mid-1700s, a young runaway couple were eloping to get married and riding through Castleton where they stopped at an inn. A group of lead miners observed the bag of money they had on them, and as the couple set off into Winnats Pass, they were robbed and murdered by the miners. One of the miners is supposed to have broken his neck at the pass, another crushed by stones and a third miner is said to have killed himself. Once the sun sets, the ghosts of the ill-fated couple apparently ask for help. Those of the miners lurk too around the entrance to the pass.

We, I am glad to say, did not meet the couple or the miners.