You possibly know him. Georges Prosper Remi. He turned around his initials. R.G (pronounced Hergé in French) was born and and there you have one of our beloved cartoonists.

This post is my tribute to Hergé. The extent of his talent was revealed only when I took a train from Brussels one cold January day in 2014 to Louvain-la-Neuve.

You see, Hergé started me off on an intense affair with books.

My first book – post a series of Lady bird books involving titles such as Beaky the Greedy Duck and Tiptoes the Mischievous Kitten– was a Tintin. I used to shut myself in my library room in Calcutta, that in course of time became my haven whenever I wanted to escape the world (which was too often). Then I would look at tomes that lined the dark ebony shelves. The rows of Tell Me Why and The Encyclopædia Britannica were positively daunting. Names such as Frederick Forsyth, Harold Robbins, Alistair Maclean and dark red bound volumes of Sarat Chandra amongst others seemed too much for an 8-year-old (just before I discovered the wondrous world of Enid Blyton).

But there was one file-size, hardbound book. The cover showed a young boy with a quiff, tied up to a pole, a mutt peering from behind him, while a grumpy Native American with a massive headdress and poleaxe pointed at the boy. In the background stood a couple of tipis and Native Americans sitting as onlookers, waiting for a show to begin.

I was caught in a world that thereafter became my refuge from everything and a bane for my mother who bemoaned the fate of a child who read only story books to the exception of all school textbooks.

Till I grew up and went to college, the years were spent playing hide and seek. An extremely odd game.

My mother went about hiding my books with great regularity. I went hunting for them as  regularly, telling myself, “If you were her, where would it be?” Invariably, I found every book she hid, except for the first Mills & Boon that was gifted my a best friend on one of my teenage birthdays.

The Catholic University, in a beautiful town in Flanders called Leuven, was split into the Dutch Katholieke Universiteit Leuven in Leuven and the Université Catholique de Louvain in Louvain-la-Neuve.

Louvain-la-Neuve is a quiet and young city where I had to warm myself up on a grey winter’s day in its big shopping mall. In its main square, I found myself in the midst of a carnival, flanked by giant carnival figures. I never found out what it was about. Everyone in Louvain-la-Neuve strictly spoke French. But away from the centre, at the edge of a green park stood my reason for travel. A futurist building that is the Hergé Museum.

The leisurely couple of hours spent inside the museum was an eye-opening experience and made me appreciate Hergé markedly.

“Tintin (pronounced ‘tahn-tahng’, with n quite nasal) saw the light of day in 1929, and 1929 was the year of the great globe-trotting reporters that criss-crossed all over the place, with their travelling bags boarding the Trans-Siberian express, getting aboard ships… To me, my ideal was the reporter, a veritable hero in my eyes…I had great admiration for the real-life journalists, and, amongst them, those that were true reporters.” Those are Hergé’s words describing the birth of his footloose, young reporter.

Born in the Etterbeek district of Brussels, the cartoonist had a lower middle-class upbringing that was unobstrusive. But his career was anything but.

Tintin was preceded by Totor, a chubby boy-scout, who Hergé drew into being for scouting journals. In the ’20s he started working for a daily, Le Vingtième Siècle (‘The Twentieth Century’), which described itself as a Catholic and National Newspaper of Doctrine and Information. That itself tells you much about the thought process of the times and what fits in is the right-wing clergyman who was the editor of the daily. One who kept a photograph of Mussolini on his desk.

The literature of Tintin is cause for much discussion and debate probably because Hergé was a man of his times. He was in-charge of editing Le Petit Vingtième in 1928 and a year later it carried an announcement which proclaimed that “always keen to satisfy its readers and to keep them abreast of what is happening abroad” Le Petit Vingtième “has just sent into Soviet Russia one of its best reporters: Tintin!”

Our hero was born with his forelock which was blown into the stiffest-of-all-possible quiffs that neither hail nor wind could break. With his faithful companion, Snowy. The venture into the Soviet was supposed to be a message from the clergyman editor to young Catholic readers, of the dangers of falling for Bolshevism. Tintin in Congo smacked of racism, asserting the superiority of white man over fellow men.

A turning point for Hergé was meeting a Chinese student at the Brussel Academy of Fine Arts in 1934. “I believe that Tchang, unknowingly, figured as one of the main orientations in my life. He was a young Chinese student whom I had happened to meet when, with his assistance, I was composing the adventure of The Blue Lotus. It is he who made me conscious of the need to get the true facts on a country and to lay out a coherent story. He remained in Belgium for a number of years and then returned to Shanghai.”

When WWII broke out on September 1, 1939, Hergé had to turn up as a reserve lieutenant, thus interrupting Tintin’s adventures in the Land of Black Gold. Forced by the Nazis, Le Petit Vingtième had to shut down and Hergé started making new Tintin strips for Le Soir, a leading French daily in Brussels which had been turned into a mouthpiece for the occupation forces. He did fine-tune his next few Tintin in an escapist mode (and thus you have The Shooting Star and The Seven Crystal Balls and Prisoners of the Sun) to veer away from current affairs. Hergé was accused of being a collaborator after the war because of the Nazi control of the paper, and was interrogated. But he firmly maintained that he was simply doing a job as any other professional under the occupation.

Post the Second World War, Hergé said: “I recognize that I myself believed that the future of the West could depend on the New Order. For many, democracy had proved a disappointment, and the New Order brought new hope. In light of everything which has happened, it is of course a huge error to have believed for an instant in the New Order.” 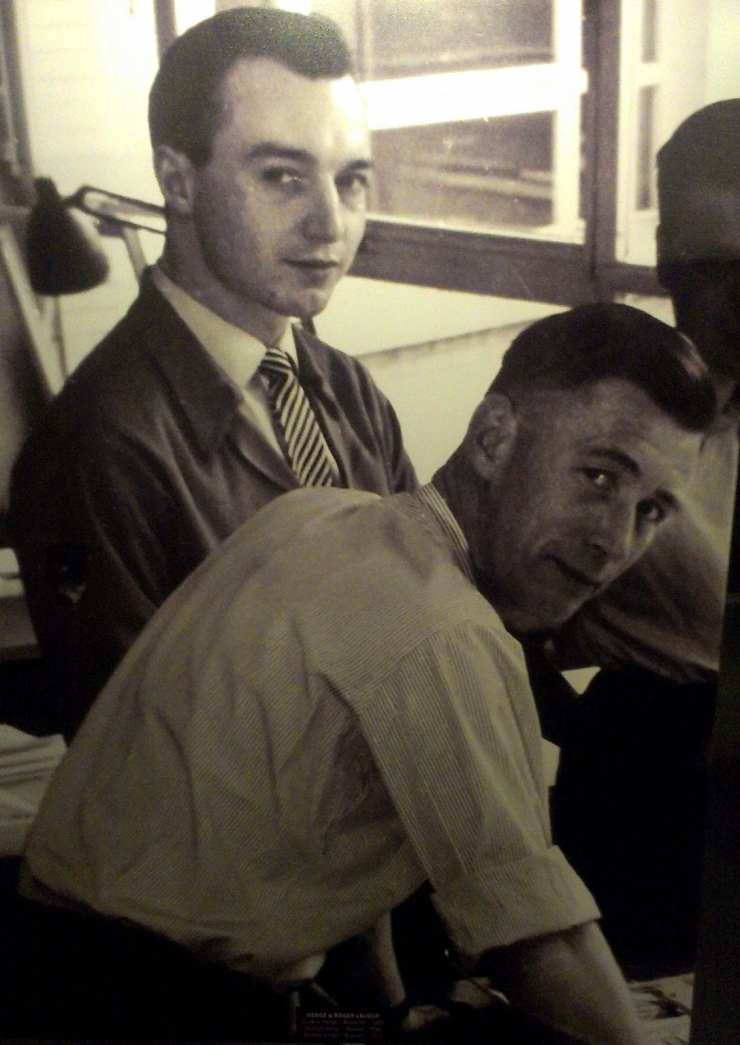 Apart from the cursing captain and his colourful vocabulary, I was always immensely fond of the bumbling detective brothers. The black bowler hat, the mustache, the dark suit, and the cane apparently stemmed from a subconscious reference to their creator’s own background. Hergé’s father had a twin brother who copied him in everything. He had remarked about it: “My father had a cane, my uncle went and bought the same one. Yet he says he never thought about it when he created Thomson and Thompson. “But the coincidence is strange, all the same,” he accepted.

My hands itch to buy each and every title when I spot them, e’en though I have them stacked away in Calcutta. I become that child all over again, putting together my pocket money carefully to buy my stash of Tintins. Isn’t it a beautiful feeling? Not outgrowing some things in life.