On the other side of Scala, far from the crowds of the Amalfi Coast is Ravello. The town hugs the top of a ridge that looks out onto the Gulf of Salerno. Our very first sight of it and we were irrevocably, irreversibly hooked. If a fairy godmother materialised and swished her wand for me, I would ask for a home in Ravello, on those mountains with a view of the inky Tyrrhenian. We would then be residents of a town with a history that goes back all the way to the 5th century when it was founded as refuge from attacks by barbarians. In time, it became a wool-producing, trading powerhouse in association with the Republic of Amalfi.

There is a story behind Ravello’s name. The first known inhabitants of this hamlet were Romans. There is little knowhow about Ravello from that period except for the fact that it was absorbed into the Republic of Amalfi during the 11th century. Two centuries later, its residents rebelled against Amalfi and the hamlet was dubbed ‘Rebellum’.

I revel in the sound of it. Ravello. Mark how it rolls off the tongue. And when locals enunciate it their sonorous way, she sounds like such a beauty, with the lush ways of a Sophia Loren about her.

The first thing you will notice from the coastal road that winds around the town, apart from the lush green hills and the very blue duet played by the sky and sea, is surely a modernist building that rises like a wave. It is a theatre designed by a Brazilian modern architect, Oscar Niemeyer, which sticks out incredulously in a medieval town. But then, it did fit in with the stories that add an aura of glitz to Ravello.

The town was the romping grounds of the rich and the beautiful during the ’50s and the ’60s. Stories abound, of the reclusive Greta Garbo who took off with conductor-composer Leopold Stokowski to the Villa Cimbrone in Ravello, in the midst of a highly secretive affair. Of how the villa was thronged, and Garbo heavily annoyed had remarked about the need for a doctor, ‘in case anyone is hurt’.

I could, in my imagination, see film stars clinking flutes of bubbly and emitting tinkling notes of laughter as they took breaks from lazy laps in the pool of the uber luxurious hotel that stood adjacent to the theatre building. A contrast to this picture was perched, immediately across the valley, atop lush green mountains in the form of an austere monastery.

We ambled down to the Chiesa di Santa Maria delle Grazie, a 12th-century church with steps leading down to the coastal town of Minori. Lured by the solitude, we descended the steps as a local led his donkeys down alongside, beneath a tall, lone Cypress. If we had been going down them steps in the old days, say in the 16th century, we might have been offered wine on our way down to Minori. The man who had built the church had apparently stipulated it to his heirs.

We sat on the walls of that church, with a view across the Gulf of Amalfi. It had an unreal quality. We had turned out to be the hero and heroine of our own dreams. 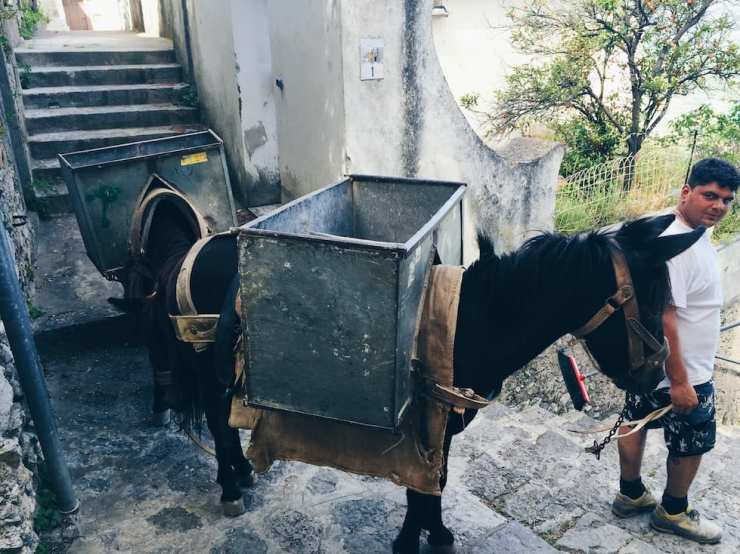 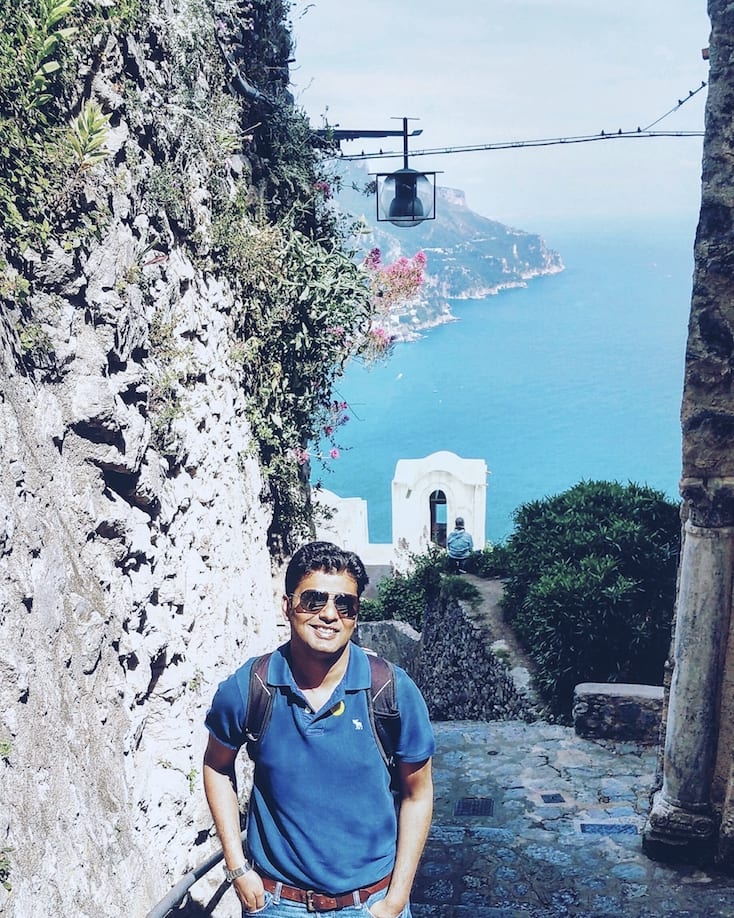 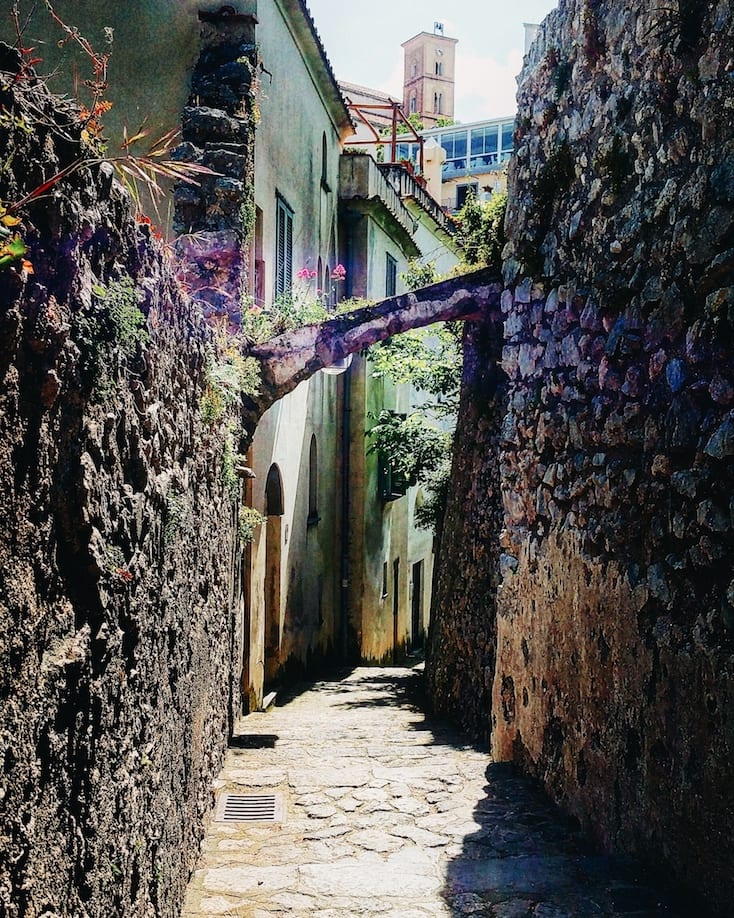 In the cathedral square of Ravello, stands Villa Rufolo, named after the powerful family who lived in it. They became even more famous when the 14th-century Italian author Giovanni Boccaccio made a Landolfo Rufolo one of his protagonists in Decameron.

D.H. Lawrence is said to have spent time in the villa when he started writing Lady Chatterley’s Lover. Yes, writers such as Virginia Woolf, E.M. Forster and Andre Gide too had soaked in the wondrous charm of Ravello, not to leave out the German opera composer Richard Wagner.

Wagner visited Villa Rufolo in the late 1800s and he was inspired to compose the opera Parsifal. On a stone plaque on the walls of the villa are immortalised the words: ‘Il magico giardino di Klingsor è trovato’. It means ‘the magical garden of Klingsor has been found’. Now, every year Villa Rufolo hosts a Wagnerian concert in its gardens and this summer music festival gives it the epithet, la città della musica (The City of Music).

Standing upon the terraces of Villa Cimbrone, a few yards from Villa Rufolo, I could appreciate the words of Catullus that’s inscribed upon a bronze statute of Hermes: ‘Lost to the world of which I desire no part, I sit alone and speak to my heart, satisfied with my little corner of the world, content to feel no more sadness for death.’ 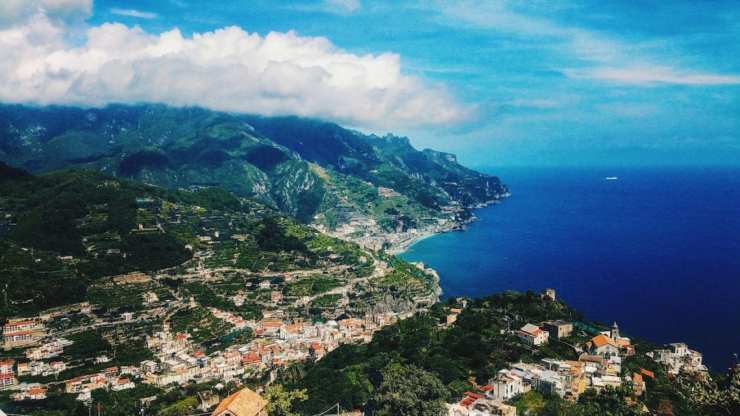 Mamma Agata’s (http://www.mammaagata.com/) cooking class. She has cooked for the likes of Fred Astaire and Humphrey Bogart and has many a story to tell.

Take the coastal footpath down to Minori.

Monastero Di Santa Chiara. You have to plan for it. It is open only on Sundays for morning service.

Ravello-Atrani walk along one of the oldest routes on the coast.

Hotel Rufolo (http://www.hotelrufolo.com/). Superior Sea View Rooms start at € 195 per night. The hotel has a roll-call of famous names to boast of, and one of it guests, French writer Lucette Desvignes wrote words that makes you want it all. She had noted: ‘From the medieval towers to the infinity of the sea, all belongs to you: mountains, coast, lemon valley or vineyard, magic garden, Moorish cloister, Byzantine cupolas, pine trees, all is yours and you take it with you when you leave.’

33 thoughts on “Even a Shed in Ravello Would Do”