It is a gloriously nippy day because we have driven up north to Yorkshire for the weekend. A walk in the green, green dales can only do us good, right? We drove last night for about four hours and passed through Derbyshire. Descending the hilly roads in the county, a crooked spire much like the twisty hat of a witch loomed up ahead. For me, the market town of Chesterfield has become synonymous with its crooked spire.

One Samuel Bromley even wrote a few lines for it in the mid-19th century.

“Its ponderous steeple, pillared in the sky,

Rises with twist in pyramidal form,

And threatens danger to the timid eye

That climbs in wonder.”

I don’t know about ‘danger to the timid eye’ but it certainly challenges the mind to come up with stories or go with legends that come with it. St Mary and All Saints is a late-13th century parish church upon the spire of which Satan is supposed to have landed while flying from Nottingham to Sheffield. He must have been a great sneezer that Satan – because the entire burden of the twisting of the spire is laid upon one sneeze.

There is another story that goes with the church – a stunning bride with great virtue entered the church and inspired the spire to bow. It froze in that posture clearly.

The power of satan or the power of great beauty? Well, the more non-ludicrous and staid reason is probably that the spire built straight could not bear the weight of 32 tonnes of lead tiles placed atop it. The herringbone pattern of the spire cements the twisted look. 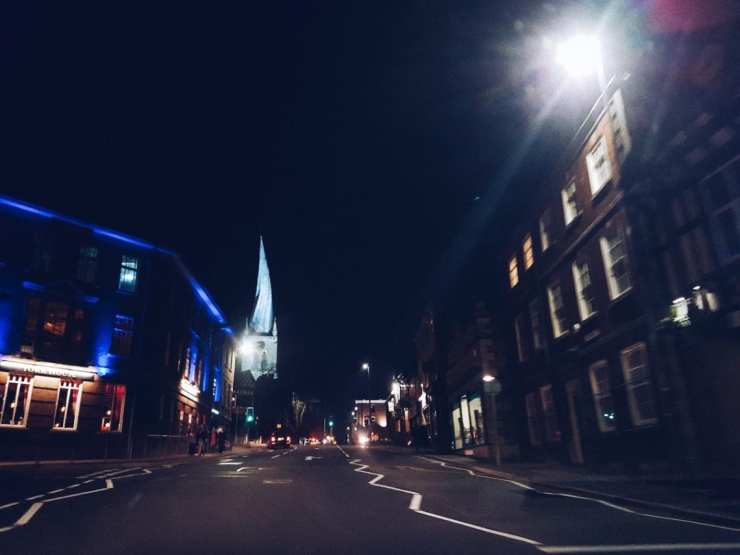 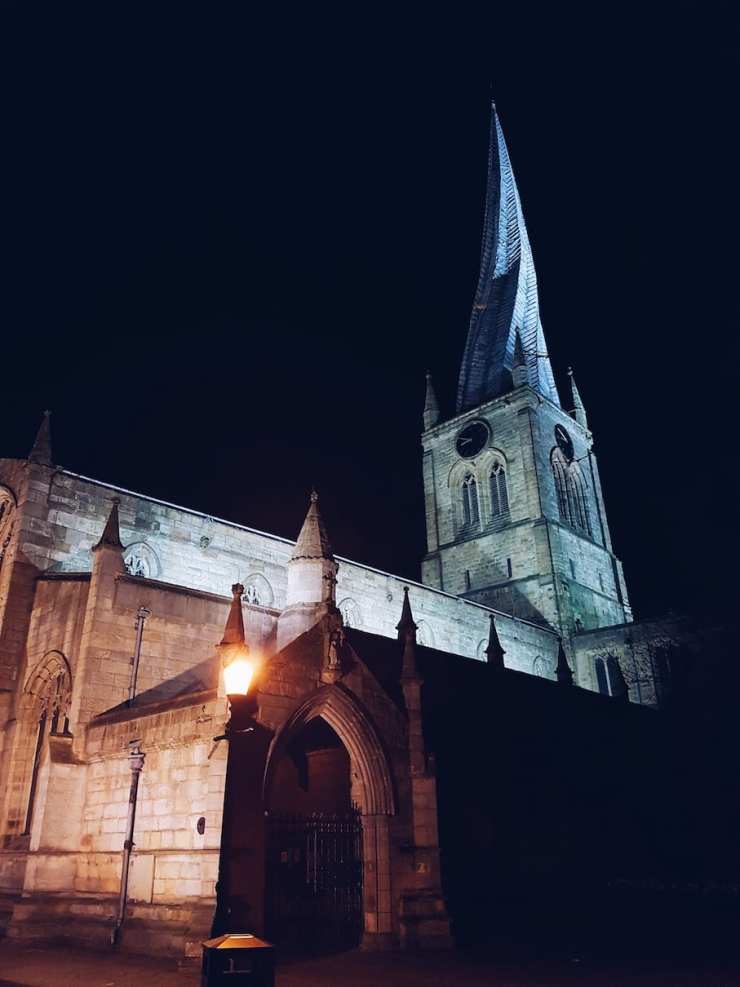 As we left the lights of these towns behind and made our way through the dark country, we took a few minutes to get off on the grassy knolls, shiver and throw our heads back to stare at an upturned, inky bowl shimmering with stars.

None of the magic of it could but compare with the lardy and wrinkled nude back of an old woman in a hotel room. After midnight, we reached the hotel bleary-eyed, collected the room card, crawled to the room and inserted the card. Adi opened the door and to my astonishment I heard voices issuing out of the room. The telly is on it seems, I thought, and before I could get any further with commenting on the oddness of it, Adi looked scarred and a disgruntled man appeared at the door simultaneously. “But there seems to be a mistake, this is supposed to be our room too,” he said. Since they were comfortably settled in – the lady of the room had even decided to discard this modern inconvenience of clothes – it was only fair that we rushed back to the reception where the gentle, bald man was startled enough that he did not know how to react. It also meant that at that moment when Adi looked appropriately grave and annoyed (the best way to get extra hotel points for occasions when the hotel goofs up), I was shaking and vibrating. You know how it happens when you try and repress peals of laughter. The large desktop computer on the till in front of me was my refuge or so I thought. Adi assured me it was not.

We did get another room (thunk god) whereupon we threw ourselves upon the bed, laughed till our stomachs ached and then just passed out.

How is your weekend going? If you have any nude, old ladies and crooked spires featuring in them, we might be in the same part of town.

23 thoughts on “Church with the Witch’s Hat”