The countryside has zero pretensions. None of the glitz, glamour, competitiveness or fatuous claims that is part of our daily lives are to be found in the country – unless you are a recluse who is pretty much done with the frivolities of life, and have therefore retired in the bosom of the country, where your life is about communion with nature. Nature is insidious, isn’t she? She will make her way into your heart with sheer smoothness. Each country escape is a reinforcement of that thought.

We met an old couple at a tearoom in the village of Muker after the long walk to Crackpot Hall. The man was the spitting image of Ian McKellen (remember him? ‘Magneto’, ‘Gandalf the Grey’…). When he turned around, I almost said out loud, “Gandalf!” I did not however do that. It is not alright to unleash your wonkiness on poor, unsuspecting people who have just met you.

Nattering away is the best thing you can do during tea time. So there we were finding out nuggets about each other – stranger couples exchanging life stories. It turned out that Gandalf and his wife were hardcore Londoners. Forty years ago, they moved to the Yorkshire Dales. His grudge was against Americans (come on, don’t get grumpy all over me, I am just the purveyor of conversations) invading the city. “The day the Americans came in and they stopped doing beer for lunch, I knew it was time for us to leave London,” he said.

The British have their priorities in place. You cannot fault them on that.

Lengthy conversations with locals apart, we drove around the Yorkshire Dales. Now the dales are about pure tradition. It starts from the way the farmers tend to their land, roaming around the country lanes with collies perched upon the back of their quad bikes, as they send gruff smiles your way. Dry stone walls patch work lush rolling slopes and meadows while limestone barns pop up all over the latticed landscape.

Then you see cottages carved out of local stones, ruined remnants of 18th-19th century lead mines, small waterfalls, bales of hay stacked up by the meadows, ancient woodlands, small stone bridges and gurgling brooks flowing through the valleys. At the end of the noon, droopy as a dog, you step into an old, traditional pub with stone-flagged floors and large fireplace, plonking yourself at a table in the garden. The drill goes thus: Chug on pints of local ale accompanied by no-nonsense pub food. Gastro pubs look the other way. Your neighbours will be cyclists, motorcyclists, many sizes and shapes of dogs along with their owners, and oodles of walkers. As the honey-golden sunshine of the noon softly touches upon the face, you smile away the sunburn you have acquired during your rambles and you know this that the dales have got you good.

An expansive stretch of village green, a local postwoman making her daily rounds in the village, a coffeeshop with tantalising cakes, a tiny convenience shop, three village pubs (who said that they did not want you to be spoilt for choice in Reeth), two churches and a smattering of stone houses. You have entered Reeth. A village in upper Swaledale that lies on the B6270 road. There are plenty of walks to do around it. Just head to its information centre. The old lady at the till will take her time in helping you out with suggestions.

This was our starting point for the walk to Crackpot Hall.nMuker Beck runs through the tiny village where a handful of houses stand next to the river and a ribbon of a road runs past them. You can see the church peeking out from above the stone cottage with the creepers. In the old days you might have been witness to all significant occasions in the life of the poor folk taking place in this church made of wattle and daub and heather thatch. They walked miles and miles to get here for weddings and burials. This single church in Muker is historical – it is one of a handful that came up during the reign of Elizabeth I in the 1600s.

The dales believe in minimalism. A village shop and tearoom come together as a package, a pub stands next door and then you have a boutique selling Swaledale woollens, which displays a placard informing you all-importantly, it was graced by the presence of the Prince of Wales. After such a clear sign, if you want to buy anything (at extortionate prices), let it be upon your head.

One of the smallest and evocatively tranquil villages in the Upper Swaledale. It just has the Keld Lodge and one Butt House B&B. No shops. Yessir, you gotta get your supplies elsewhere because you shall get none in Keld. The original name of the village was Appletre Kelde (‘the spring near the apple tree’), derived from the Viking word Kelda (‘a spring’). Keld lies at the crosspoint of two challenging hiking routes in the country – the 267-mile long Pennine Way which spans the length of the Peak District to the Scottish border, and the Coast-to-Coast Way that runs from St. Bees in Cumbria to Robin Hood’s Bay in Yorkshire. And get this: During the height of the lead mining industry, Keld had about 6000 inhabitants. Today it has less than a 100 villagers. There’s a reason to fall in love with the villages in the dales.

Gunnerside country is curiously flat and the farmers here stick to the traditional methods of farming. A methodist chapel, a smithy, a pub, a primary school and a post office are all you shall spot within this small settlement that gets it name from the Nordic word Gunnar’s Saetr, meaning the ‘Viking king’s summer pasture’. Somehow it is difficult to imagine the Vikings on this flat, serene landscape, but if history says so, who am I to bicker. When we made a stop by the beck in Gunnerside, a man hiking through, his shirt open till his waist, stopped for a brief hello. One of his lines got stuck in my mind. “They say this is the Yorkshire Riviera. Today, you can’t doubt it.”

I have got a surprise for ya. The Scandinavians were in Thwaite. Well, you would say duh by now. Which means you are reading this, plus you would be right too. Naturally Thwaite gets its name from the Old Scandinavian word thveit which means ‘meadow or paddock’. I just remember the barking of dogs in the distance in Thwaite and a farmer passing by in his tractor loaded with a bale or two of hay. There was not another soul to be seen in the village and these are scenes from an early evening. 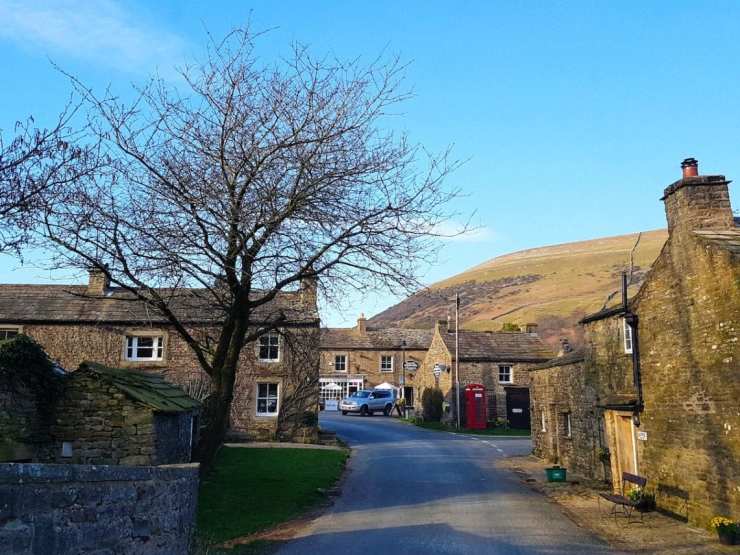 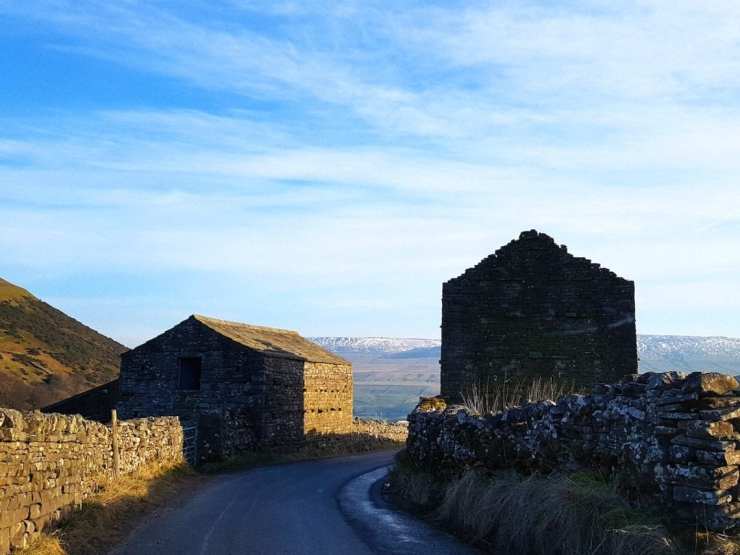 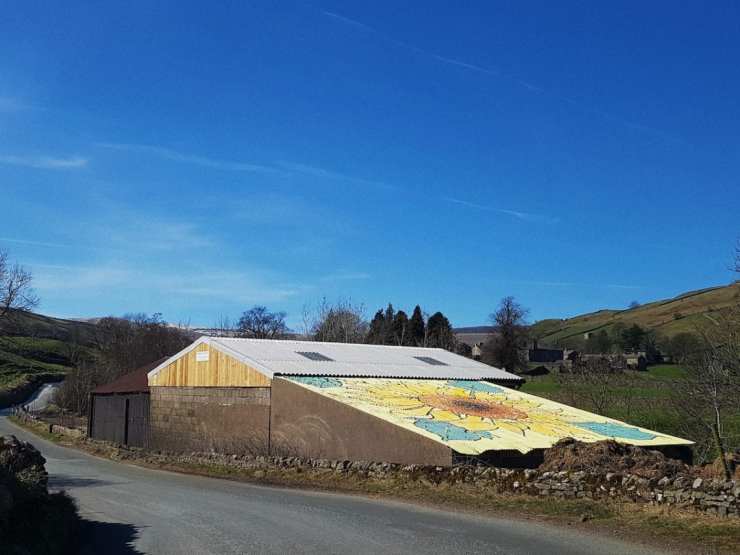 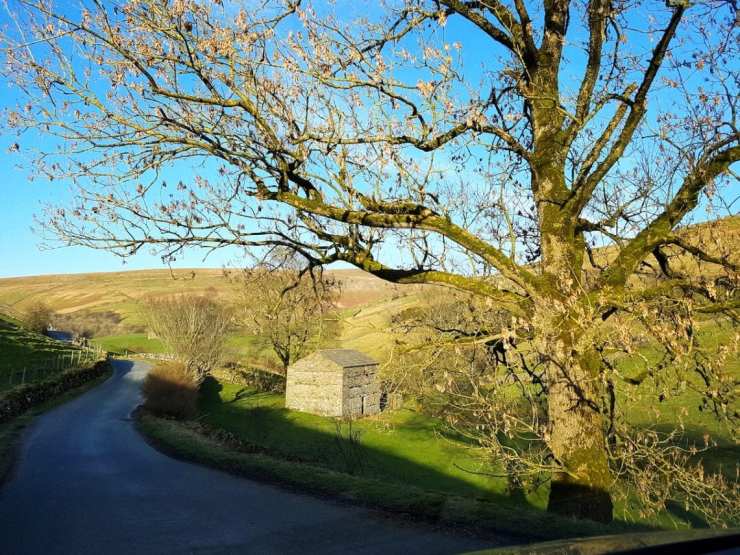 That is all. With massive motifs of sunflowers, sheep, dry stone walls and limestone barns popping out of the landscape, we drove into the sunset.

45 thoughts on “Up and Down the Yorkshire Dales”