It is a dull day and I have a sore throat and I can see my sprightly neighbour do his bushy-tailed dance on the cable wires hanging outside the apartment. This squirrel scurries up and down the wires everyday. The first day I saw him I was worried. Was he stuck up there — trying to figure a way back to the sprawling greens across the road? But  sometimes you need to hear your thoughts out loud before you can fathom the ridiculous nature of them. Now having redone the apartment this morning feeling the call of hygge, having put away some extraneous details and arranged the leaves of autumn to lie artlessly around, some pine cones too, I have lit a candle which smells delicately of eucalyptus and mint. Good enough for me as I set out to write. I wanted to take you further into the heart of the beautiful Cornish villages in Britain till I felt the urge to tell you about my weekend which was eventful for someone who likes to huddle in a couch with a book or binge watch shows on the telly.

I was going to do just that — read Diana Gabaldon and swoon with comfort food ordered up in my hotel room this weekend – when Adi would hear none of it. I could not be sitting alone in a hotel room on a Friday night and he be partying. Woeful by any measure, he declared. We had driven up to the former spa town of Saratoga Springs in New York which is home to Adi’s boss. Now Boss Man has decided to fly the nest of his present firm for greener pastures. His colleagues naturally grew misty-eyed and threw a fond farewell party at a dimly-lit taproom that was the picture of distressed chic. Exposed brick walls, textured ceiling, Edison bulbs, sepia-toned photos hung upon the walls, the hubble-bubble of men and women.

As the evening matured with alcohol, cheese and laughter, it turned out that I would be the only woman in a group of five men because the female colleague decided to (intelligently enough) leave early. Over red wine, platters of salami, manchego and blue cheese, I was learning about the kind of life I have only read about and gleaned from conversations with a Swedish chef who I had interviewed a few years ago in a hip Shoreditch restaurant in London. The chef lives in the wild inaccessible forests of the province of Jämtland in Sweden, forages for vegetables, lichen and berries, and hunts every piece of meat he puts out on the menu. Naturally he has been acing lists of foodies who have taken the trouble of reaching his outpost in the great outdoors. I would like to experience it except for the thought of a cow’s substantial femur being sawed out before my eyes as live theatre and the prospect of being presented with the contents of the marrow — makes the bones judder. Not Adi’s though. He has stressed over and over again that he is up for it.

To get back to the evening at hand, one of Adi’s colleagues shares a similar outlook of life as the Swedish chef. This guy lives on a remote piece of land, about 300 acres of it under his ownership, in the woods near the Canadian border. There where towns by the name of Bombay turn up, named for ‘Indian princesses’ who migrated there from the city of Bombay in India, and where his neighbours are Native Americans in a reservation noted for gambling (here he interjected the conversation with, ‘one of my friends from the tribe was arrested lately for driving around the area with $500,000 stashed into the car’) — this chap lives off the land. He hunts for big game and fishes in the lake nearby to put food on the plate for his family of two toddlers and wife. He showed me a photo of the wife proudly holding aloft a fish that must have spanned 4ft. at the least.

Every bit of food is accounted for and nothing is wasted. In the last week or two he has been out hunting moose, but they are elusive creatures and live high on the mountains, usually it is just deer. His grandfather liked hunting for bears because he liked bear meat. All I could think of was:

‘A sweet, innocent, harmless, leaf-eating, doe-eyed little deer. … Imagine you’re a deer. You’re prancing along, you get thirsty, you spot a little brook, you put your little deer lips down to the cool clear water… BAM! A fucking bullet rips off part of your head! Your brains are laying on the ground in little bloody pieces! Now I ask ya. Would you give a fuck what kind of pants the son of a bitch who shot you was wearing?’ The Marisa Tomei monologue in the rip-roaring My Cousin Vinny. Yes, you got it.

BM reached out for his hunting colleague’s neck and patted it saying sardonically, ‘You are meeting the quintessential redneck.’ In this world where we obsess over politically correct terms, our friend from the woods was least bothered by any of it. He was just quietly confident about the kind of life he leads. ‘I eat what I kill, I know where my food comes from and I do not hunt for pleasure,’ he told me simply.

Later after two glasses brimming with red wine, I was ready to call it a night. But when you are with the guys, you gotta develops guts of steel, and do what the men do. Drink. We tripped down to a bourbon bar. I drank endless glasses of water – so much so that the two bartenders ended up replacing my glass as soon as they saw me without one — and the men luxuriated with their measures of golden bourbon. There I heard the life stories of the male bartender with the silver nose stud and of the tattooed initials of his little boy who had died early of an infection, the female bartender who can do just about four shots of tequila in a night, watched people enter the loo in twos, an irate bearded bouncer hot on their tail, and had my forearms examined by a jockey to determine if I had the makings of a horsewoman…evidently not. 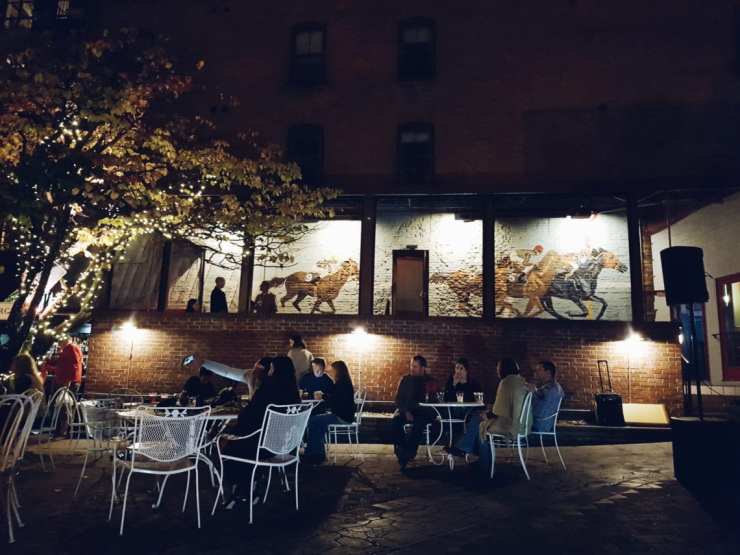 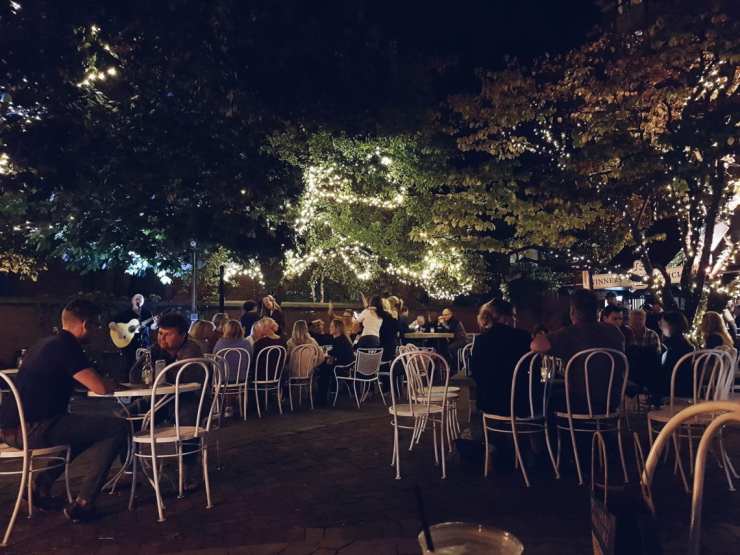 81 thoughts on “The Saratogan Night Out”