That was yesterday. I was born 37 years ago to a woman who had accompanied her husband to the Middle-Eastern kingdom of Oman. In another culture which was alien to her, where the people sat for meals around gigantic metal trays and pulled chicken off bones — all in that one plate — to show that they care. Omanis inculcate intimacy through their meals. My mother told me that she found it a bit odd and often shrank from the prospect of eating from one plate with people she hardly knew. But I find the idea a bit nice. That the Omanis can and want to eat off one plate. Maybe it is the fact that something tugs at my heart when I think of my birthplace.

It was also a place where the men kiss and hug newborns without inhibitions — which put my mother off and she attributes the fact that I contracted some infection within a few days of being born to that propensity of my visitors. She had given up on me. ‘I asked my youngest brother (who used to work in Oman too) to take care of you while I slept for days with tiredness and depression.’ I carry the marks of it on my inner ankles. A star-shaped mark on each. Reminders of beating mortality early on when the doctors had to make two slits in them to insert saline drips. I think of them as birth marks because I do not think I have any other.

As I turned 37, I did not mind that this was a birthday where I went with my usual routine but the difference was the shower of love I was the recipient of. From friends and family through calls and messages all day long. Our niece who had celebrated her 9th birthday a day before cut a strawberry cake for the both of us in Seattle and sent me a cutesy video along with her brother.

Cheila’s Saramago postcard arrived just in time, a night before, like a wonderful precursor. Adi had already gifted me a cache of dresses. Then came two huge boxes of boots he had asked me to choose – a tan slouched pair with stilettos, which make my senses sigh with pure pleasure, and a dark taupe over-the-knee pair that also do the job pretty well.

I am not that fussed about gifts but these added a sparkle to the day as did the skeins of wool and crochet needles I gave myself along with a pile of old and new books. You should always gift yourself something or the other from time to time — and on your birthday, why not, right? From me to me. I have so many books that say that, it is a tad embarrassing. Someday when I leave this life and those books are possibly in some charity shop and picked up by a stranger, he/she would possibly think, ‘what a nut job!’. And oh yes, I want to start learning to crochet. My mother would bawl here with laughter. How she tried to teach me knitting when I was a teen — but really, I had more important things to do than knit then. This is when I know I am 37.

Adi was working from home. From time to time he got up and hugged me with ‘Budday Gurl’ chirpings. He was feeling guilty but he has been burdened with work for some time now. Americans like to work hard. It is an admirable trait in this country even though it can cause you to burn out early.

In the evening, I went for a long, long run because it was crisp and cold, the park cleaners were out blowing leaves in big piles of gold and russet, and the squirrels had turned even more tubby than you would think it possible. I promise you this that they can hardly scamper with their earlier agility of summer. I have detected one of them whose tail has got left somewhere so that it is a sad little stub. I wonder what’s the story behind it. It is not everyday that you see tail-less squirrels after all.

During the course of the run, I stopped for a breath and a chat with a gruff old fisherman by the Hudson. He had just caught a sizeable striped bass from the Hudson. One of those beret wearing men, chewing on tobacco, and possibly thinking to himself, ‘Oh no, Chatty Cathy!’ But I am nothing if not persistent in the face of gruffness so he did give in and gifted me with a sentence. In the evening while Adi and I squabbled over Monopoly after a lovingly-rustled up dinner of cauliflower & leek soup and baked chicken steaks, the boy next door turned up with a birthday card and hugs. I was thrilled to bits. I had made coffee-flavoured dark chocolate with pumpkin seeds & pecans for his partner and him because the birthday cake I had made earlier on with blackberries and blueberries was scrumptious, but when I slipped it into the refrigerator to chill, the tall tower of mini cakes had toppled right over. Talk about whimpers.

Oh, and I met a 3-month-old Boxer pup in my building called Luka, twice over on my birthday, and he refused to leave me each time till his master had to pick him up and leave. That was also a delightful gift.

That’s the long and short of it, my birthday, as it was this year. 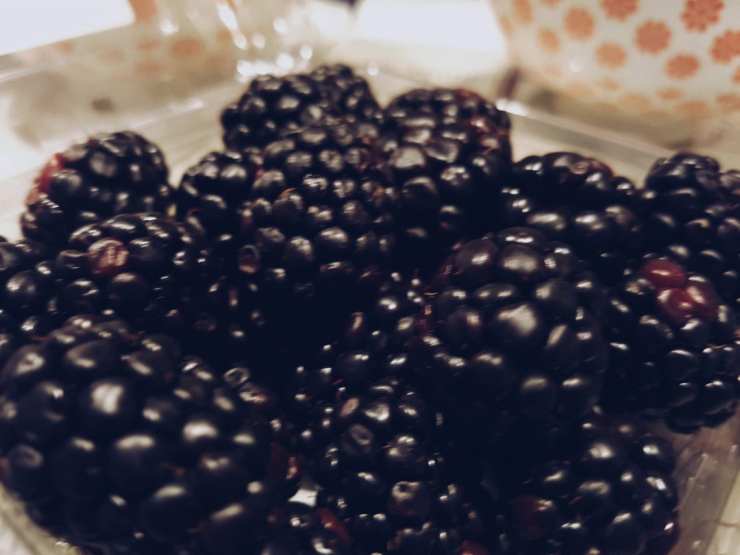 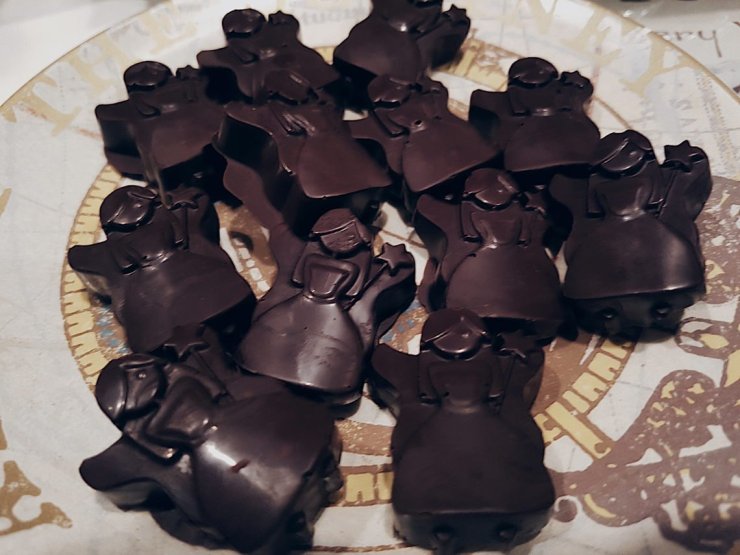 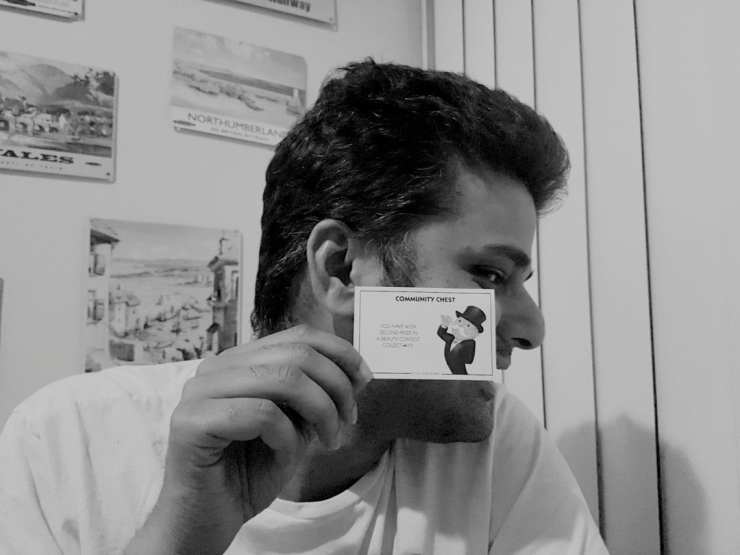 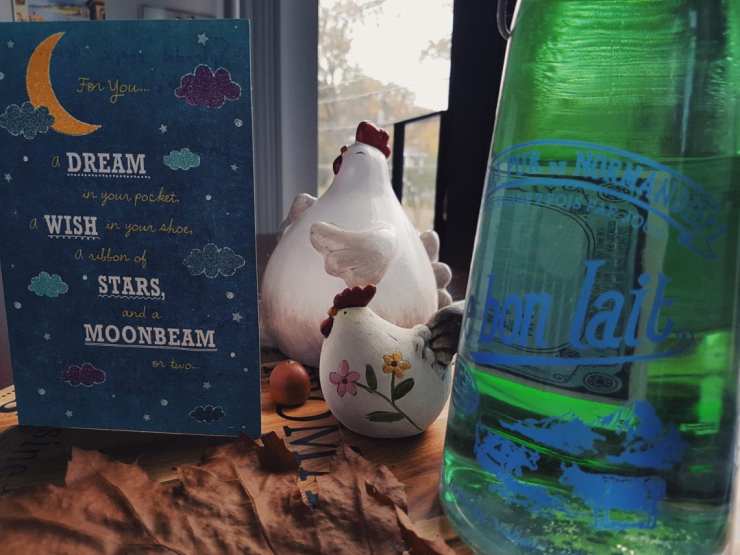 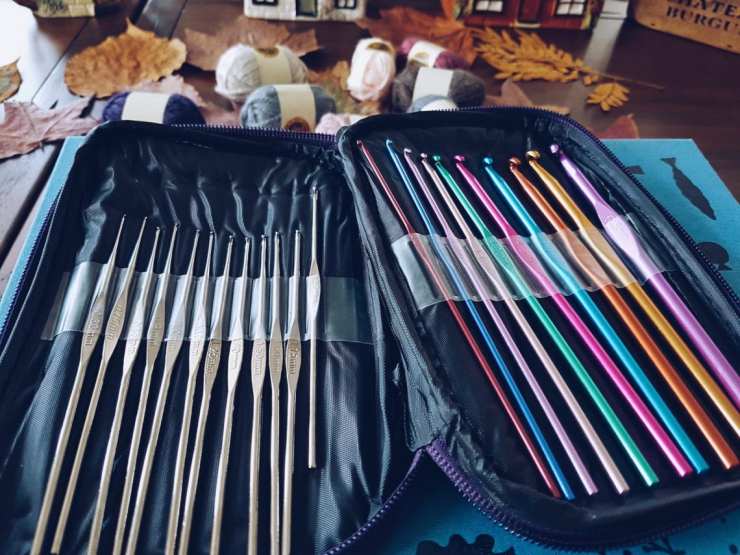