In the land of blue smoke that the Cherokees called Shakaney, a fine mist cloaks the top of the hills. There is an illusory sheen to this vista. The soul feels transfigured, as if ready to be lifted out of the body, to roam free over those uneven folds in blue that meld in, wave upon wave of them stretched for as far as the eyes can travel.

Now picture this. The sun is ready to call it a day, a stretched out orb of gold gleaming through a break in the clouds, kissing the hills, the white and purple flowers growing wild upon them with golden love. You arrive at Clingsman’s Dome, the highest point on the Appalachian Trail that traverses the length between Georgia and Maine and intersects with the Smoky Mountains here. It is is quite so cold, the body jolted out of the heat it has got used to during the long-drawn summer (to think that it already past us!). You find yourself shivering – wishing you had the foresight to carry a jacket for cutting out the unexpected chill.

‘But where is Clingsman’s Dome?’ asks the husband, worried because this is the holiday of indolence. Does it involve a hike, perchance?

That is how you would have found us on that early September evening when we started walking in the direction of this observation tower named for a 19th-century North Carolina politician and Civil War general, Thomas Clingman. An itinerant soul who spent the latter part of his life climbing mountains and measuring them.

We were in a spruce-fir forest, patches of berries and wildflowers showing up along the way, and then the mighty odd sight of white specters of trees that must have been. Fraser firs, trunk leaning against trunk in parts, so that it seemed like they had thrown in the towel on an unequal struggle with a pest that attacks them with impunity, leaving no survivors upon these high peaks. As we trudged up, passing by a mother with her grumpy little girl, Adi stopped in his tracks as he looked at the sky. ‘It’s raining heavily there — and those clouds are coming towards us, and fast,’ he said.

Sure enough, I had not noticed when the clouds had gathered behind us stealthily, an ominous army on the march. This meant that a frown was gathering too, on my husband’s brows, because this idea of making our way to Clingman’s Dome was mine. Naturally. He insisted, we must turn back. To which I declared, no, we shall carry on. But naturally.

Grumbling husband in tow, in some time, I spotted the dome towering in the distance like a spaceship balanced upon a sky-high column. Hallelujah. A half-mile hike but one which was long enough because it was steep to boot. The beginnings of a mizzle sent us scurrying up a corkscrew ramp which swung around in an arch and brought us wheezing to the top of the dome. Thirteen-odd people hunched beneath the dome which provided insufficient coverage from slanting rain because soon it graduated to a pelter.

The loudest of the bunch, decibels above everyone else, was a group of Indians from the state of Gujarat who proclaimed that they were (gasp) viewing mountains. There were other mind-numbing observations — but the heavens decided that we needed respite. The rain eased up and the gang decided to exit. We could hear them all the way till they had made it to the bottom of the ramp. Then there was silence and white walls of clouds around us, screening out everything except for the closest firs.

A couple, the girl from Minnesota and the boy from New Jersey (loathe to lay claim to it), looked our way and commented that they were holding out for a sunset. Something special. ‘You are an optimist,’ I observed to the guy. Frankly, I thought he was a loon. This was till the time that the clouds that had descended upon us started to dissipate and lift up visibly, so that you could see waves of smoky hills emerge as if in a film. And then before our eyes, played out nature’s live theatre, second by second. Live theatre like we had never seen before. A sunset like we had never seen before. And don’t even know if we will see the like of it again.

There were suppressed gasps from everyone beneath that dome. We were as if woven into one big thread of enchantment by that phenomenon, for that is what it was, a concoction of clouds, mist, firs, greens, blues, greys, pinks, lavender, flaming orange, dirty orange. A strange mélange to escort us into a parallel world of reality. 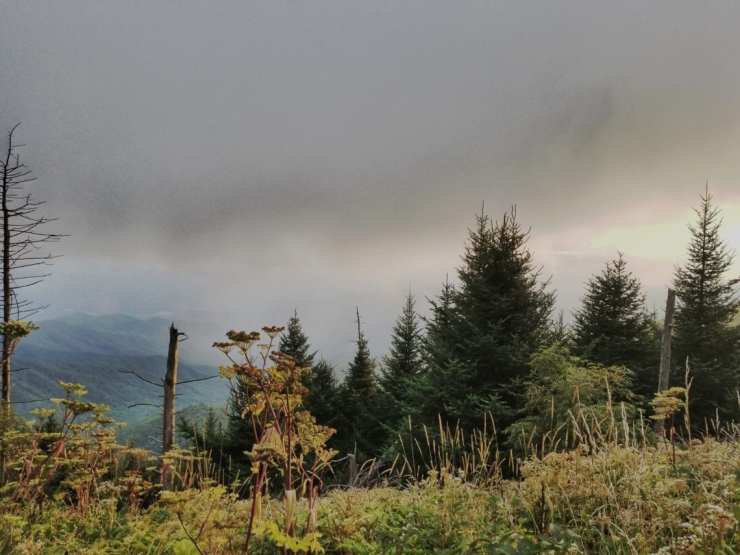 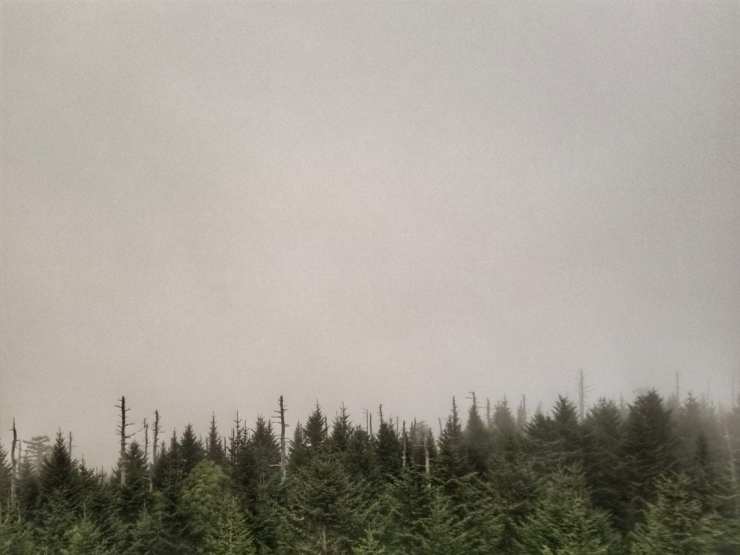 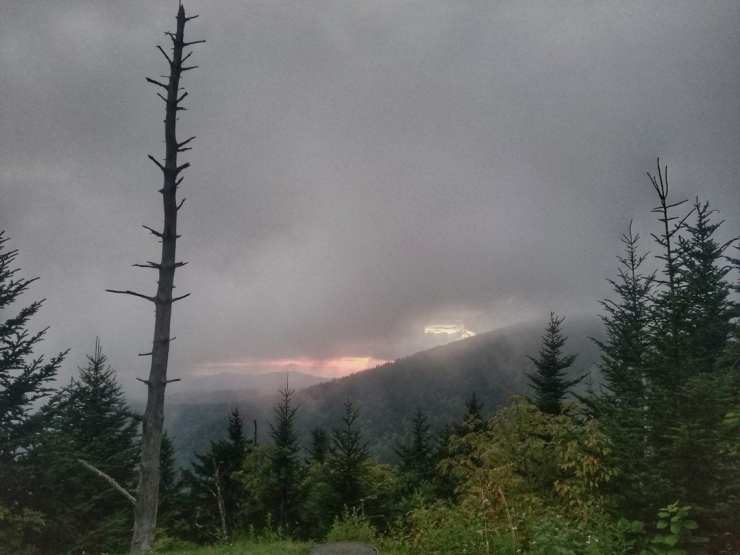 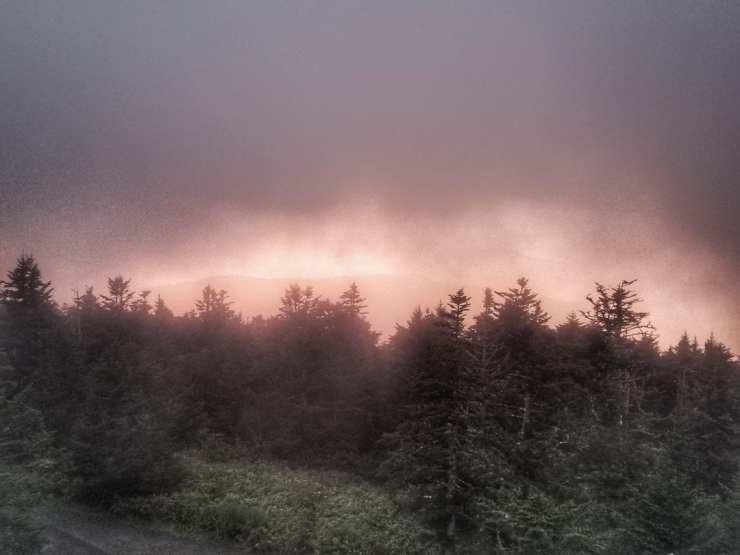 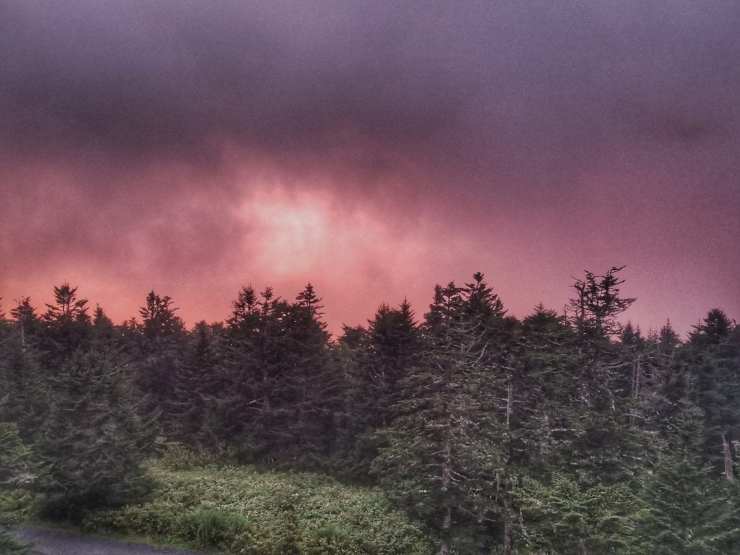 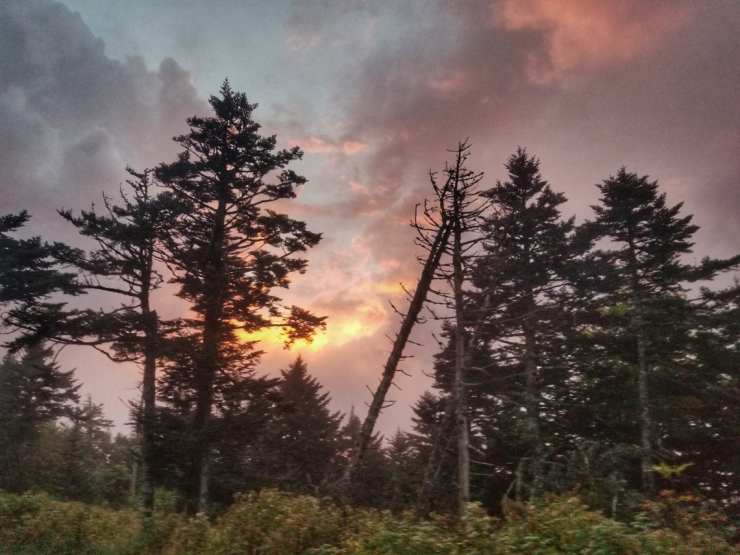 47 thoughts on “Clingsman’s Dome: The It Place in the Smokies”