There are days when I want to walk so far that the mind is consumed by everything and nothing. Just the pleasures of walking down pavements, noticing life as it has become. A still painting.

Because we live in a post-industrial waterfront town of which we know nothing beyond traipsing around the picturesque park we are used to, one of these days when the skies are thick with swollen clouds, I walk to the other end of town which spills onto the tidal channel of the Kill Van Kull (Dutch for “channel from the pass”). Our waterway link with Staten Island and New York.

The road to Kill Van Kull is long, spanning quite a number of blocks, but the walk is not tedious. The pavements might not be lined with examples of flamboyant architecture, but a medley of styles, so that the mind is constantly engaged in noting the variety of architectural details thrown up along the way.

First, the unexpectedly attractive facade of the high school. Gothic Renaissance. Improved upon by the presence of trees bursting with magnolias.

Then, pretty row houses, community buildings worse for the wear, humdrum box buildings (the infamous Bayonne Boxes built in the wake of WWII — the architects who conceived them must have fallen asleep halfway through, bored by the results of their own efforts), part-brick part-clapboard houses, Victorian facades, skinny houses. Wrought-iron balconies, front porches, fire escapes climbing down big somber houses.  Sandwiched in between these is a tall building complex from the ’70s, stacked one upon the other.  Little boxes bring little joy to the eye.

However, as I near my destination, the houses begin to transform in character. These are surprisingly pleasing to the eye. Sprawling Mock Tudor houses, big clapboard houses that look like they must have been built when Bayonne started to get its first clutch of residents, elegant redstone houses with manicured lawns, wrought-iron garden chairs and tables, one of the houses with decorated carving and a small signage above the entryway stating that it was built in 1887… did anyone even live here in 1887, I think to myself.

Turns out the first person to set eyes upon the shores of Bayonne was a Florentine  named Jean de Verrazzano, as early as the 1500s. An explorer in the service of Francis I, King of France, Verrazzano had sailed into New York harbour at the time. They named the bridge connecting Staten Island with Brooklyn after the worthy Italian.

A journal entry from Henry Hudson, sometime in 1609, describes shores he came upon during his sailings upon the Hudson. He wrote about the shores, that they were “pleasant with Grasse, and Flowers, and goodly Trees”. “Sweet smells came from them.” He was referring to Kill Van Kull, which I am bound for. It is also where his party was attacked by a group of Native Americans.

A network of roads wind above me, part of the highway that leads to New York City, and as I continue walking, the scene starts veering towards industrial. A 19th century brass foundry, which once supplied brass parts to the U.S. Navy during WWI, now converted to house a dollar store. A stretch of railroad tracks, probably disused. Geese droppings on the tracks. Old factories and warehouses in tatters. Large white tanks. And an atmosphere of haunting desolation typical to industrial quarters.

The wind has turned sharp as I sight the behemoth arch of the Bayonne Bridge spanning the Kill Van Kull and dominating the skyline. These very paths I roam was once covered in dense forests. Wild animals had the run of the place. Bears and panthers, wild cats and wolves, beavers, red deer, rattlesnakes, squirrels, and foxes. The only human presence here would have been of the Sanrikan Indians, of the Delaware tribe. When there would have been no bridge, no park, no houses, but just a small village. What would the Native Americans have thought of this transformation of their place? Who knows. They have long gone and what remains is this land. With a whole lot of houses stretching along the blocks, a couple of them formerly home to author George R.R. Martin. Them, a strip of a park, the bridge, Staten Island across the waters. And a gaggle of wild geese roaming about the greens, clucking and complaining. You are in the way. 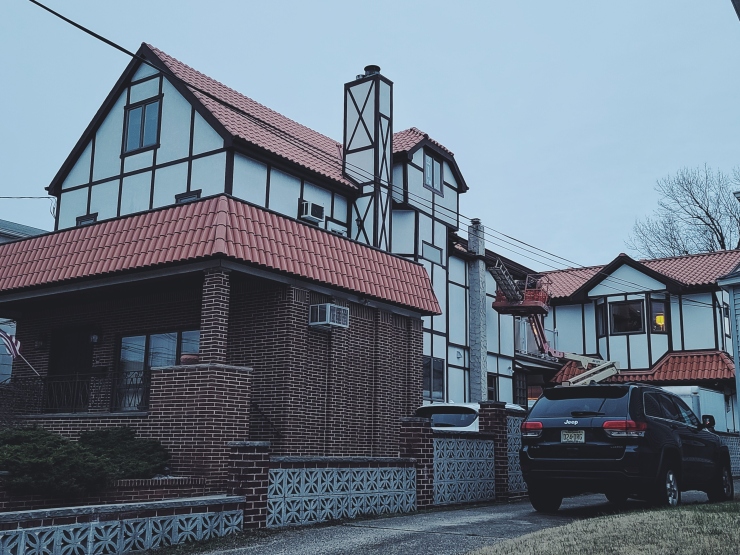